It was 2010, and 38-year-old Dr. Neil Kanterman had been trying to get into shape since 2004. He’d join a gym, and once inside he’d run on the treadmill and make an attempt to use the weight machines. He didn’t know what he was doing and nobody was there to help him, so he usually stopped after a month or two.

And he was adding a few extra pounds each year.

Kanterman was already on blood-pressure medication in 2010 when his cholesterol got high enough that his doctor prescribed statins to bring it back to normal.

At 5 foot 9 and 220 lb., Kanterman wasn’t obese, but the number on the scale was rising each year. Not yet 40, he was already on two different medicines he knew he could avoid with better lifestyle choices.

“I am a physician,” said Kanterman, a pediatric ophthalmologist. “I (was) familiar with what was going on. I really wanted to try to do something to stop this from going down that road.”

For him, the statin prescription was the last straw.

“I just felt I was too young to start down the road of med after med and then more meds to treat the side effects of those meds,” he said. 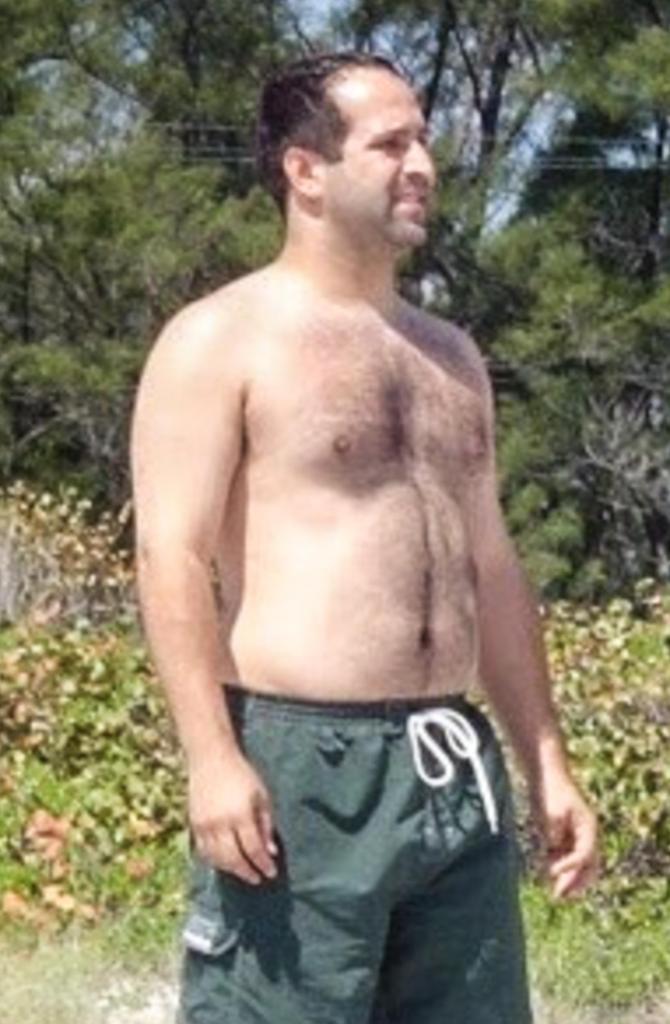 The good doctor, before and after CrossFit. 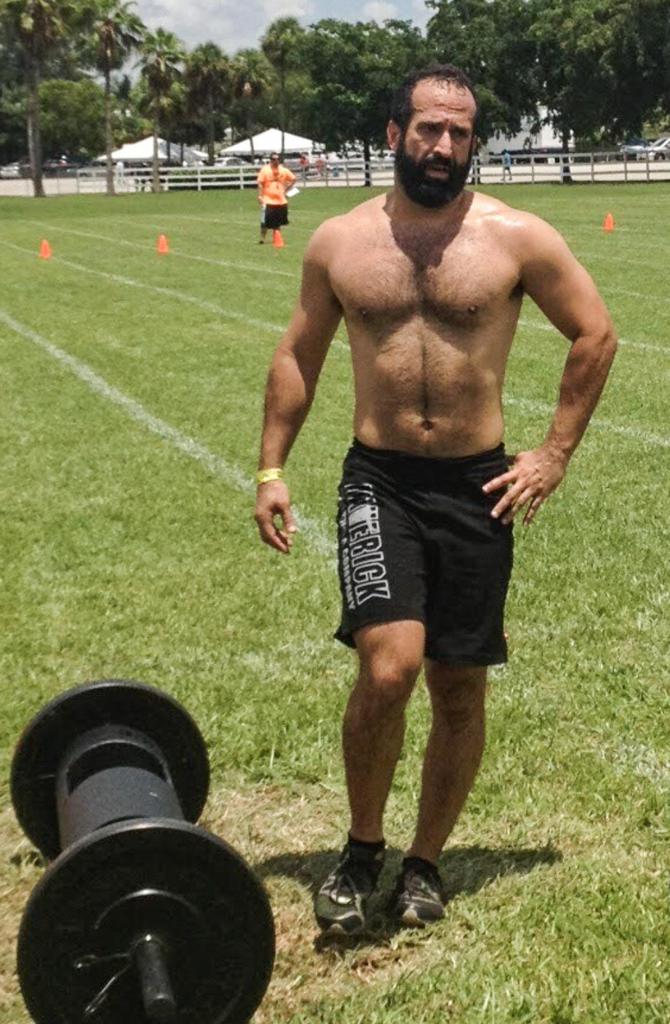 (Both: Courtesy of Neil Kanterman)

Lost at the Gym

The problem, Kanterman said, was he never knew what he was doing at the gym.

Growing up in Brooklyn and Long Island, he didn’t play sports—Kanterman focused on academics instead of athletics. He graduated from college and then medical school before spending five years training in his specialty of pediatric ophthalmology.

He was learning how to improve the health of others, but little time was left to focus on his own wellness.

In the summer of 2004, Kanterman started working as a pediatric ophthalmologist in Florida. His schedule opened up, so he resolved to start working out.

“I tried and quit gyms more times than you could imagine,” Kanterman said.

“The whole walk in, try to do 30 minutes on a treadmill, hit some machines, not really knowing what I was doing very well, … I started and quit that probably eight times,” he said.

Meanwhile, Kanterman didn’t pay very much attention to his diet.

“I loved my Italian food,” he said. “I’m a Brooklyn and Long Island guy growing up, so I definitely loved a lot of pasta. Really pretty much I ate anything and everything. I wasn’t a huge soda drinker (but I drank) a lot of orange juice. You think you are being healthy, having a drink like orange juice, but you’re not.”

When the statins were prescribed, Kanterman knew he needed a big change, so he decided to try something new. 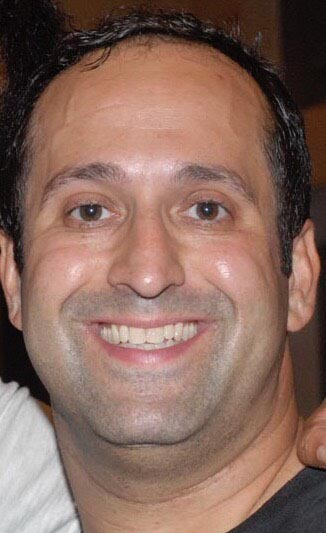 Despite medical training, Kanterman let his health get away from him. His cure: diet and exercise. (Courtesy of Neil Kanterman)

He’d driven by CrossFit Hardcore in Boca Raton, Florida, a few times, and he’d read enough about CrossFit to be intrigued. On a Wednesday in 2010, Kanterman told his wife—a dedicated long-distance runner—“I’m going to stop in after work.”

The first workout was terrible, Kanterman said. He modified it and even then didn’t finish. But as he left the owner at the time slapped him on the back.

“Just make sure you come back tomorrow, that’s all. Just keep walking in the door and we will do the rest,” Kanterman said the coach told him.

Kanterman followed the instructions and returned. On his next visit he started chatting with a man who’d been doing CrossFit for about six months. The man was a few years older than Kanterman but could do things that seemed impossible to the doctor.

“He was a very nice guy, and we traded numbers right away,” Kanterman said. “He was always inquiring if I missed a day—‘Hey, where are you?’—and so I had that immediate personal connection.”

No longer left to wander directionless through a gym, Kanterman found he liked working out. A week after he started, his wife tried a CrossFit class, lifting weights for the first time in her life. Soon, she was hooked.

The weight dropped off as Kanterman cleaned up his diet and started exercising. As the pounds fell away, his blood pressure came down.

“For me, it was almost a direct relationship,” Kanterman said about his weight and blood pressure.

His blood pressure normalized quickly, and so he stopped taking medicine for it soon after he started CrossFit. He ditched the statins as well as his HDL levels (the “good” cholesterol) went up and his LDL levels (the “bad” cholesterol) and triglycerides came down. Now, seven years later, the only medicine Kanterman takes is to treat Hashimoto’s thyroiditis, a thyroid condition he’s had for most of his life.

Once he started exercising, Kanterman began to pay attention to his diet. He listened to what his coaches told him and did his own research, realizing he knew little about nutrition though he was a highly trained physician.

“I sort of reeducated myself with regards to diet and exercise: ‘Maybe the food pyramid is a mistake,’” he said he remembers thinking.

Kanterman started out following a Paleo diet, then introduced grains after a few years, with an eye on controlling sugar intake and emphasizing quality. 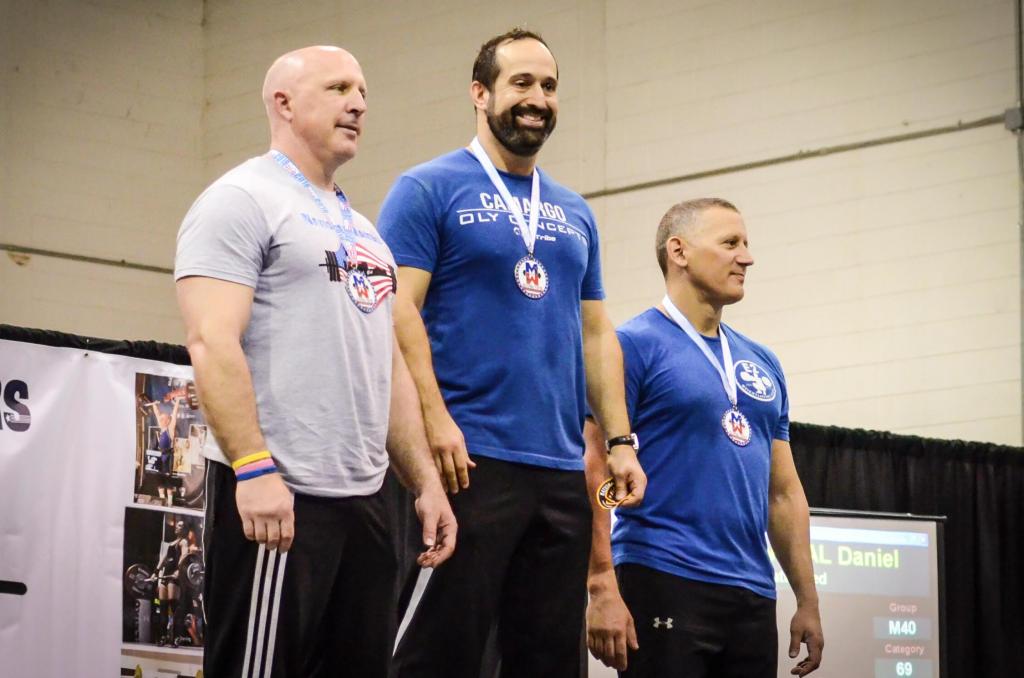 Right away, Olympic weightlifting appealed to Kanterman’s analytical mind. In 2012, two years after taking up CrossFit, he started competing as a weightlifter. He began working with Danny Camargo, who coaches national weightlifting champion Mattie Rogers. In 2016, at about 210 lb. (95 kg), Kanterman won the USA Weightlifting Masters National Championship for ages 45 to 49 in the 105-kg weight class. He’s also earned silver in the masters division at the Pan Am Games and a Masters World Cup bronze, and he plans to compete at the Masters World Championship later this year in Barcelona.

Kanterman coaches the weightlifting team—he is a USA Weightlifting Level 2 coach—including his 16-year-old daughter, who has competed at youth nationals for the last three years.

Kanterman spent a few years mostly weightlifting but recently got back into a more regular CrossFit regimen.

“Weightlifting, as great a sport as it is, it’s not necessarily the healthiest thing,” Kanterman said.

Being bigger and therefore stronger is an advantage in weightlifting, Kanterman said.

“I am trying to find a balance staying competitive and being the weight class I can really do well in, but (I want to) also keep my health markers under control and keep my weight where I feel it’s better for me for long-term health,” he said.

Kanterman now weighs about 194 lb. That’s only about 25 lb. from his heaviest, but it’s a world of difference. He’s built muscle and endurance. He’s learned new physical skills. And he’s ditched the statins and cholesterol medication. 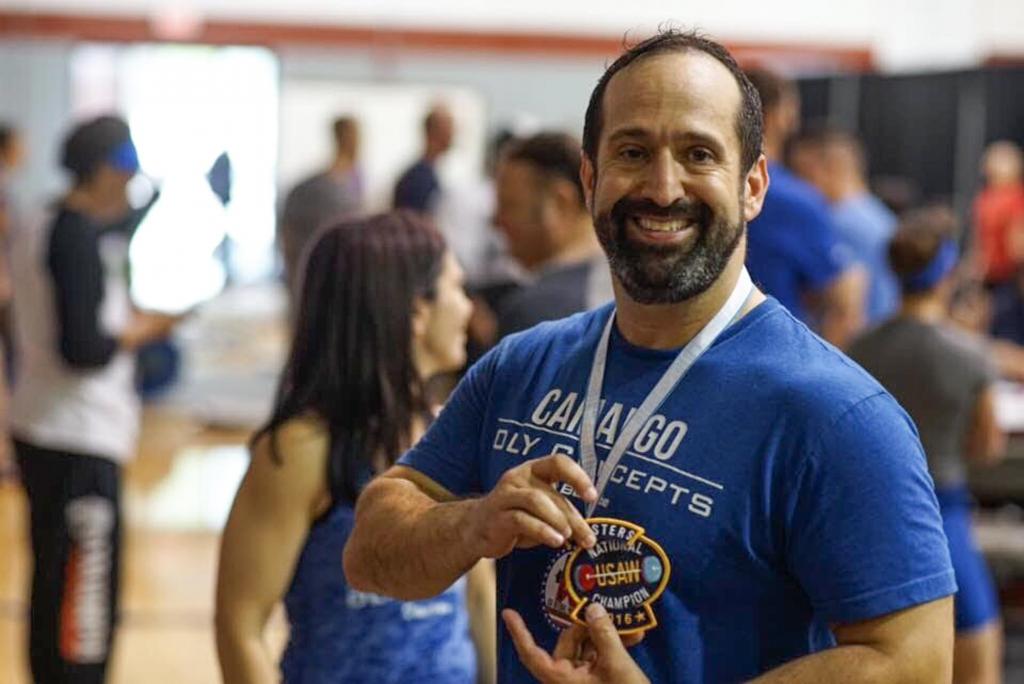 From guy who never worked out to national champion and gym owner. (Lincoln Brigham/Gryphon Strength)

He just kept trying to get healthy and work out, eventually finding something beyond the intimidating, confusing and impersonal environment of the typical gym.

Little did he know that hidden inside a pediatric ophthalmologist was a champion weightlifter who could improve his health with diet and exercise. Unlocking the inner athlete took one-on-one attention, direction, dedication and a simple but important piece of advice:

About the Author: Hilary Achauer is a freelance writer and editor specializing in health and wellness content. In addition to writing articles, online content, blogs and newsletters, Hilary writes for the CrossFit Journal. To contact her, visit hilaryachauer.com.