Thursday, Nov. 30, marks the beginning of the third annual CrossFit Liftoff, powered by Rogue. Andrew Perzel is one of the thousands of athletes worldwide who will participate in the competition’s test of two max lifts—the snatch and the clean and jerk—and general physical preparedness.

Perzel, who will turn 50 in six months, is hoping for a PR, but says it’s OK if he doesn’t get one. A Type 2 diabetic of eight years, his primary objective is to get clearance to ditch the metformin he’s been taking to manage his diabetes, a feat his doctor says just might be possible come March—so long as Perzel continues to train and eat clean.

“Every time I go to him, I’m like, ‘Can I get off these medicines?’” Perzel said.

Like countless others, Perzel has spent most of his adult life on the yo-yo diet, losing and gaining the same 10-15 lb. over the past few decades. Though his work—first in private tree care and then for the last 17 years in the highway department in Lagrangeville, New York—has kept him relatively active, he hadn’t set foot in a gym for nearly 20 years before he started CrossFit in May, and his sweet tooth was creating problems.

“Anything I ate was just going to my belly and my ass,” he said.

Perzel was diagnosed with Type 2 diabetes in 2009, at 41. Though his doctors named the direct cause a bad case of pancreatitis he’d suffered the year prior, Perzel acknowledged a probable connection between his diabetes and his diet.

In addition to doughnuts, he loved fruit juices and Gatorade and could easily drink a half-gallon of the stuff on a hot summer day at work. At 34 g of sugar per 20 oz. of his favorite flavor—lemon-lime—that’s 109 g of sugar per day in Gatorade alone. For reference, the World Health Organization recommends people consume less than 25 g per day of added sugar.

After his diagnosis, Perzel exchanged the Gatorade for seltzer water but made no other modifications to his high-sugar diet—and so while the medication brought his blood-glucose levels back to the normal range, his weight still climbed. He had trouble catching his breath on hikes with his wife, Samantha, and by January 2017 he weighed about 223 lb. at 5 foot 9.

“I was really frustrated with his lackadaisical approach to his diabetes,” Samantha wrote in an email. “I knew how he had eaten over those past three months (between physicals) and I knew it was not good, yet the numbers on the tests didn’t reflect that… . It felt like he was always fooling the doctor, but really he was just hurting himself.” 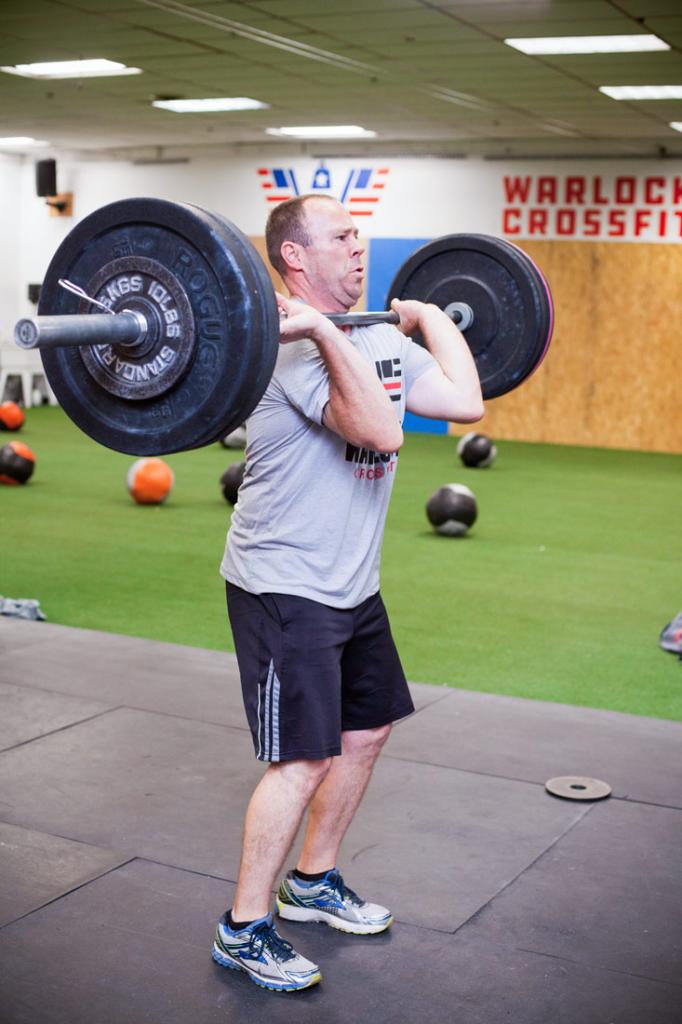 A common pattern: Andrew Perzel lost some weight when he started exercising, but things really took off when he combined CrossFit workouts with improved nutrition.

As Andrew rang in the new year, he resolved to lose weight. Though Samantha urged him to join Warlock CrossFit, where she’d been training since February 2016, he joined a globo gym instead, citing the cheaper cost of membership.

He lost about 15 lb. over the next few months, but eventually the globo gym became boring. He joined his wife at Warlock CrossFit in May.

“There’s not a day that I leave CrossFit where I’m not dripping sweat to the bone,” Andrew said.

That’s when the weight really started to melt off.

“Actually measuring everything and weighing it really helped a lot,” Andrew said.

“He doesn’t get out of breath walking up the stairs anymore,” Samantha wrote. “He doesn’t sweat profusely doing the small things around the house like he used to.”

Better than any of that was Andrew’s doctor’s reaction at an October physical.

“You’ve lost a shitload of weight,” Andrew quoted his physician as saying. “You keep going at this rate, you might be off of everything by (March). But no promises—it’s up to you.”

At first glance, Perzel might not seem a likely contender for a weightlifting competition. He never so much as touched a barbell before starting CrossFit six months ago, and with limited shoulder mobility he has trouble reaching full depth in the overhead squat, a critical component of the snatch.

“I don’t like them,” he said, referring to the overhead squat and the snatch, “but you have to do them.”

“I signed up to get in better health, and it’s working,” he said. “We didn’t sign up for it to be easy.”

He’s not concerned about how he’ll perform in the Liftoff.

“Just being there with everybody—they egg you on. They help you out,” he said, referring to his fellow athletes. “It’s a great group of people to work with. It’s fun. You’re not there by yourself.”

That’s the whole point, according to Zeyher.

“It’s a great community builder,” he wrote in an email. “It’s a great way to get friends, members, people from different classes together to let loose, throw down and sling some weights on a Friday night.”

And even after the bumpers stop bouncing and the totals are tallied, for Perzel, the best is yet to come.

“That’s my biggest reason for (training): I don’t want to take medicine,” he said. “I feel now I’ve really got something to look forward to.”

Register for the CrossFit Liftoff here.

About the Author: Brittney Saline is a freelance writer contributing to the CrossFit Journal and the CrossFit Games website. She trains at CrossFit St. Paul. To contact her, visit brittneysaline.com.